It may sound like an odd combination at first, but this Pumpkin Seafood Soup recipe is quite a popular dish!

Pumpkin seafood soup is best enjoyed during the fall when pumpkins are at their peak, but there are other reasons to try this recipe in the fall.

In traditional Chinese medicine (TCM), pumpkins are known to help promote the production of bodily fluids. As the weather gets colder, we tend to lose more moisture from our bodies. It’s not just our skin that becomes drier, but also our insides.

This pumpkin seafood soup recipe also combines another TCM philosophy for the fall. According to TCM practitioners, autumn is also the time to slow down and this includes how we cook our food. Cooking food for longer periods of time on low heat affects how it reacts with the qi energy in our bodies. The end result is a delicious soup that creates a deeper warmth and supply of more energy.

You can make this recipe even more nutritious by turning it into congee! For those who are unfamiliar with congee, it’s a type of rice porridge that can be served on its own or with side dishes. Add in ¾ cup of uncooked white rice and 3 extra cups of water or broth after adding in the pumpkin. You will need to cook the soup longer to break down the rice. For a more watery consistency, add in more liquid.

This pumpkin seafood soup recipe isn’t just for the fall though. The benefits can be enjoyed at any time of the year and it also tastes great in every season! Chicken also makes a great substitute if seafood isn’t really your thing. 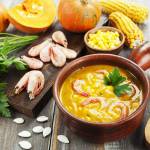 Perfect for the colder months, this pumpkin seafood soup recipe will warm you up from the inside out. It also has tons of health benefits too!
Prep Time15 mins
Cook Time45 mins
Course: Soup
Cuisine: Chinese
Keyword: chinese, pumpkin, seafood, soup
Servings: 4