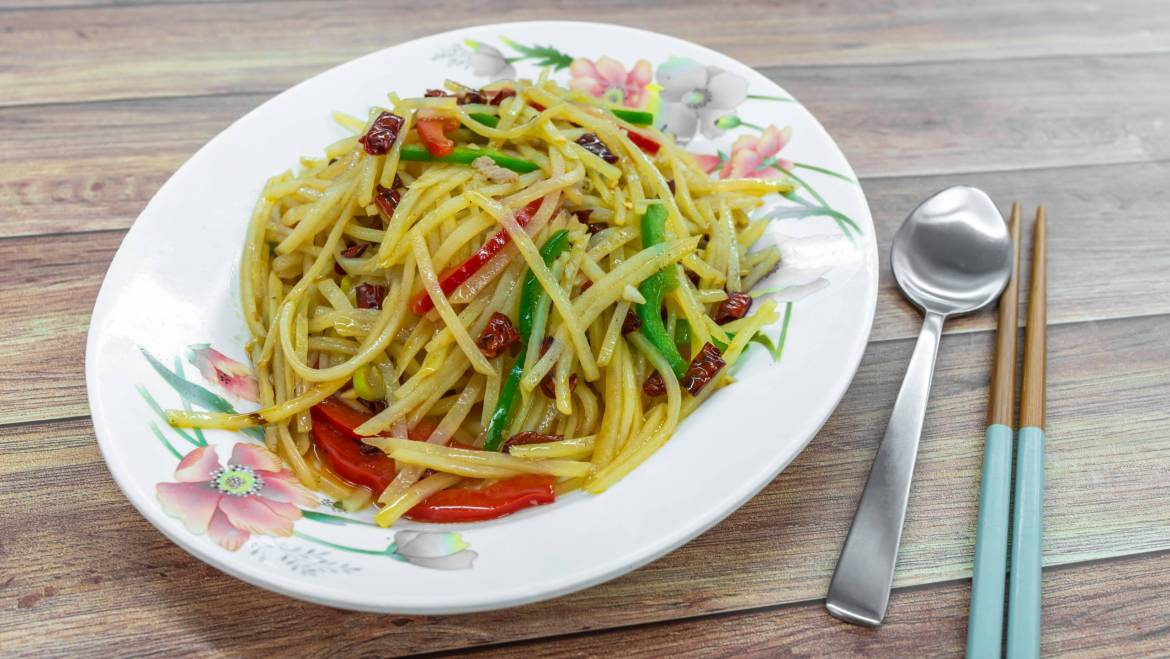 A human and basic Chinese stir-fry dish, add a spin to your carb intake with this hot and sour shredded potato recipe! Stir-fried until crispy, the dish has just the right amount of sourness and bold spiciness.

Originally a Sichuan dish, hot and sour shredded potatoes are a favourite among many regions all over China.

Potatoes are China’s largest crop so it’s no surprise that this dish is also one of the most well-known home-style dishes.

Here in North America, you’re probably used to eating French fries or roasted potatoes. If that’s the case then the texture of this dish will be quite surprising.

The Chinese developed a style of cooking that generates a crunchy, crispy texture much like that of a cucumber. By stir-frying the potatoes at very high temperatures and constantly stirring, the water content of the potatoes evaporates leaving a crispy texture on the outside while the inside is soft and tender.

Instead of just adding in the chilli peppers afterwards as a seasoning, you start the recipe by making chilli oil. To do this, oil is heated in the wok or pan and then the peppers are added. You let the oil and chilli peppers cook together to infuse the oil with its spiciness. Then the shredded potato is added in.

To get the sour part of this recipe, some vinegar is added at the end which gives the dish a refreshing tart flavour.

Taste the authenticity of Chinese cooking with this hot and sour shredded potato recipe. Don’t forget to try our other Sichuan dishes like Mapo Tofu or Bang Bang Chicken. Let us know on social media if you try this recipe!