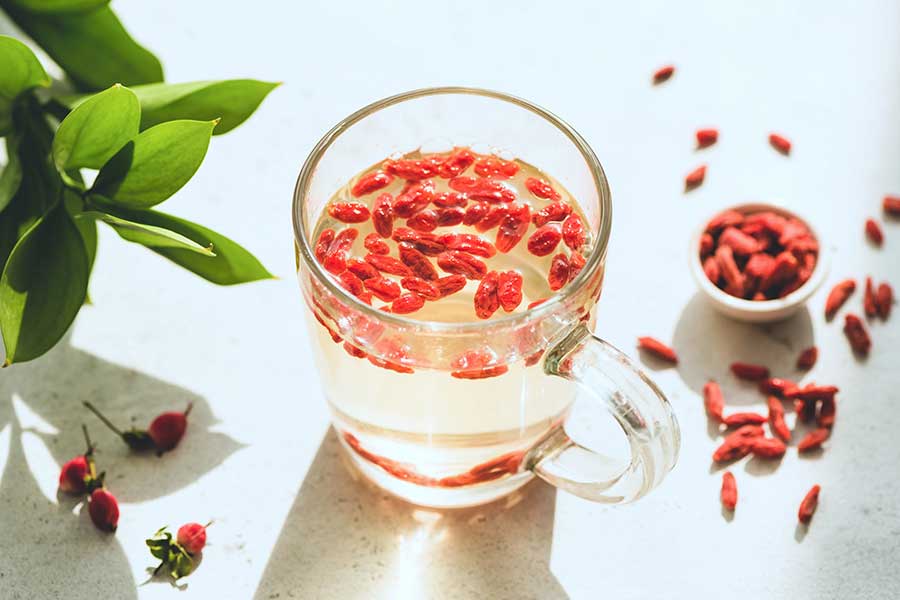 If you like cranberries or sour cherries, you’ll really love this Goji Berry Ginger Tea recipe. The spice of the ginger combined with the subtle flavour of the goji berries creates a calming and soothing aroma.

Even though it’s called “tea”, there are no actual tea leaves in this recipe. It’s referred to as a “tea” because of the yellow tea-like colour. The process of making this goji berry ginger tea recipe is just like making tea though.

Goji berries originate from China and you will most likely see them in their dried form. On their own, they taste similar to cranberries or sour cherries. The goji berries release a subtle but sweet taste but you can add a natural sweetener, like honey, to the tea if you’d like.

Ginger is no stranger to the world of tea. You’ve probably heard of lemon ginger tea, ginger green tea, turmeric ginger tea and plain old fresh ginger tea. The ginger root in these teas are often dried and then ground up before being mixed with tea leaves. The base note of ginger herbal tea is mildly spicy and piquant.

In traditional Chinese medicine (TCM), goji berries and ginger are both considered superfoods. Each has its own unique health benefits and compliment each other when combined together.

It’s best to make this goji berry ginger tea recipe during winter. Warming herbs and spices, such as ginger, help the body produce more internal heat. Not only does it create less strain but it gives you more energy for other important bodily functions.

One of the greatest benefits of the goji berry in TCM is how they nourish the kidneys, which are the most vital organ during winter. They are also packed with antioxidants that boost your immune system. 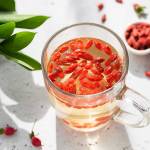 Goji Berry, the Next Superfood

Goji Berry, the Next Superfood