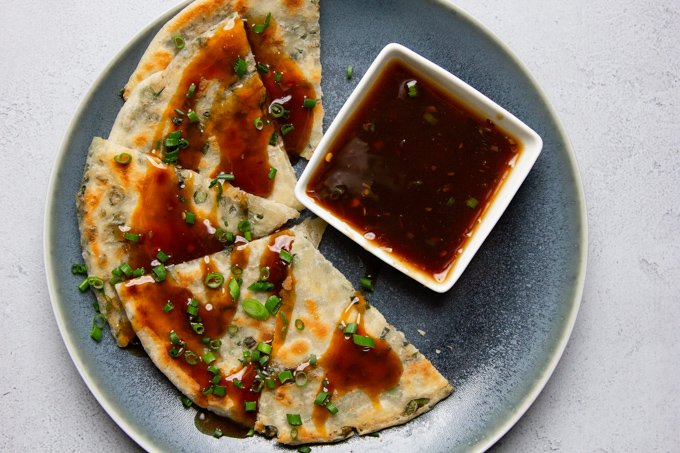 Why Do Chinese Scallion Pancakes Taste So Good? (Recipe)

According to Bill, patriarch of a family of four that blogs about Chinese cooking and culture at The Woks of Life, a scallion pancake from Shanghai is thick and moist, and jam-packed with scallions and pork fat.

It’s not just the pork fat, but that experience of getting street vendor food, that makes a Shanghai scallion pancake special.

Bill refers to street vendors as “cultural treasures in China” who are deserving of respect for preserving an “old way of life and quintessential local tastes.”

Take Mr. Wu’s story. It’s another fantastic example of how much people love porky scallion pancakes on the streets of Shanghai.

People used to line up down the street and around the corner for Wu’s scallion pancakes, which were filled with not only pork lard but also bits of salty pork.

According to Culinary Backstreets, Mr. Wu used to be the only street vendor in Shanghai who could coax hungry Chinese people to patiently wait in line for his pastries.

The author postulates that it must have been Mr. Wu’s unwillingness to skimp on quality (ahem … pork) as the secret to his success.

It would appear that pork and spectacular scallion pancakes are wedded in Shanghai. What about North America?

Well, you can probably guess the answer to the pork question.

Pork fat isn’t so readily available in supermarkets here. Nor is it a common ingredient that people use nowadays.

Back on homesteads over 100 years ago when people raised pigs they did use a lot of pork fat for cooking, but those times are long gone.

However, I wouldn’t be surprised if you find Chinese scallion pancakes made with pork fat in Chinese restaurants here. You can ask the chef if you are unsure.

They can taste just as good when they are made with vegetable oil.

I’ve even made a healthier version of Chinese scallion pancakes by using less oil than normal.

However, you can use as much as you want. If you want to try to match the decadence and crispiness of the Shanghai street vendors’ pastries, try using more.

You should also know that what really gives my scallion pancakes their refreshing savoury taste is the sesame oil, Chinese five-spice powder, and a liberal quantity of fresh scallions.

Making a scallion pancake is simple. You are sure to be successful at it as long as you keep in mind the following four secrets to success.

The first is to use hot water to make the dough!

The secret to a soft flatbread dough is to mix hot water with the flour and let it rest for a few minutes before kneading.

Hot water makes the dough softer and a pleasure to knead, and it also adds softness to the finished flatbread.
The second secret is to chop the scallions finely. It makes it easier to roll out the dough.
The third secret is to season liberally.
If you follow the recipe, you should be fine.
I call for Chinese five-spice powder, but if you don’t have this, substitute with black pepper, ground clove, or anise, and it will taste wonderful.
The fourth secret is to use a small rolling pin to shape the flatbread.
An Italian wooden rolling pin works really well. Trust me, this will be much easier than trying to roll out a tiny piece of dough with the giant rolling pin you may have on hand for pies. 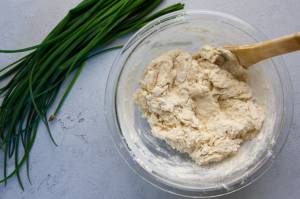 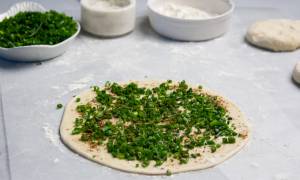 Andrea Hayley-Sankaran is a passionate vegetarian chef and digestive health coach who helps people with sore tummies find relief through the self-healing wisdom of Ayurveda. Andrea founded her blog, Buttered Veg, to teach people how to use food as medicine to nourish both mind and body. You can find her @buttered.veg