8 Treasure Congee is commonly eaten during the 8th day of the 12th lunar month, or better known as the coldest day of the year, to celebrate the Laba Festival. It’s called “8 Treasure Congee” because of the 8 types of ingredients that go into it. Easy and healthy, make sure you try our this 8 Treasure Congee recipe! You can enjoy 8 treasure congee as a side during a weekday dinner or as a guilt-free dessert!

What is 8 Treasure Congee?

Other recipes can include soybeans, millet, walnuts, pine nuts, almonds, goji berries, hawthorn berries, raisins, sunflower seeds or sesame. Some people like to add a bit of honey to give it some extra sweetness. Just remember the dried fruits tend to give the recipe a naturally sweet flavour already.

8 treasure congee is most famous as a Laba Festival dish. The Laba Festival takes place on the 8th day of the 12th lunar month. It’s a celebration of the enlightenment of Buddha and dates back to the Han dynasty (206 BC – 220 AD).

There are several legends that are also associated with the traditional 8 treasure congee recipe. One of them is about how in Northern China, during cold winters, people would eat 8 treasure congee to “stick their jaws”. Thus their jaws would stay attached to their faces. Another legend revolves around a Song dynasty general named Yue Fei, who is a national hero in Chinese culture.

8 treasure congee is also famous as a health food. Traditional Chinese medicine practitioners recommend this recipe for the young and old, those who are weak or have a sensitive digestive system. The combination of grains and beans with dried fruit, seeds, nuts and in other recipes, Chinese herbs, each provide their own unique health benefits. 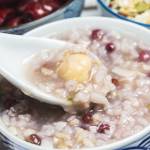