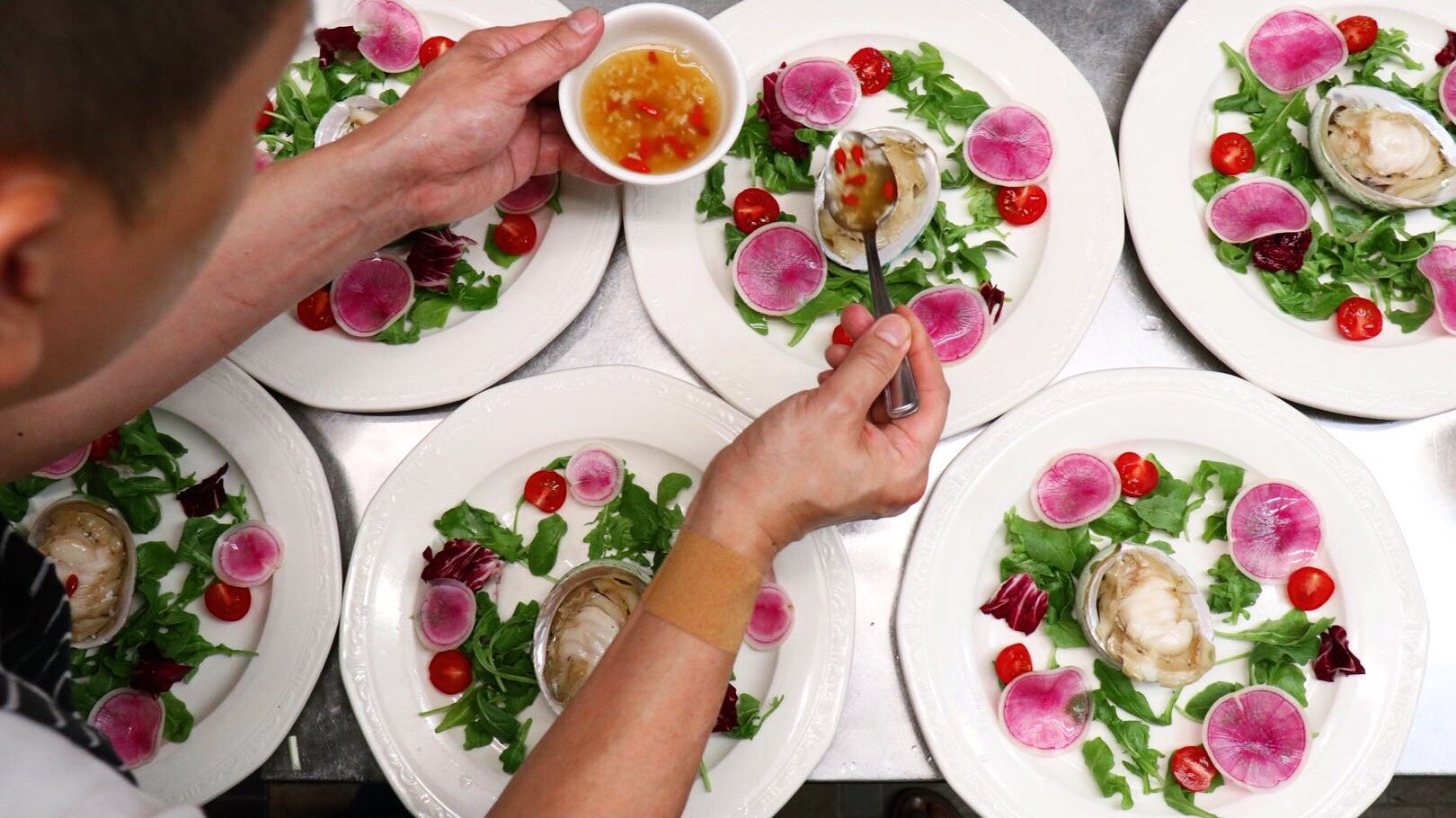 A night of cultural learning with a 5-course dinner from Wagyu beef to lobster, carefully prepared by award-winning chef Vincent Wan and his team at the Best Friend Chinese Restaurant.

Half a lobster garnished with fried garlic, nested on top of blanched vermicelli.

Registration opens at 6:00 pm. Early birds will receive a cultural tour around the Chinese Garden.

Can’t make it on August 16th? No worries! We have more opportunities on September 14th.

If you have any allergy concerns please contact us at info@dumplingconnection.com.

For more details about the event, visit our FAQ page.

The Best Friend Restaurant was established in 1994 and specializes in Chinese Cuisine. It is located in the Mississauga Chinatown Centre at 888 Dundas St E, Unit D1B. The restaurant’s menu features a multitude of traditional Chinese dishes that have all been carefully prepared by the head chef. As expected, the restaurant serves its food family-style where dishes are large plates meant to be shared among people.

The Mississauga Chinatown Centre is also one of North America’s most remarkable tourist destinations as the architecture mimics that of Ancient China’s. When you enter the area, you will pass through the centre’s main gateway which stands 43 feet tall and is completely made from timber. To maintain authenticity, the builders did not use a single nail and followed the traditional method of using wooden studs instead. The Mississauga Chinatown Centre also features replicas of the Nine Dragon Wall, a fortress at the Great Wall, stone statues and the Soo Chow Garden pavilion. Dragon Walls were used by ancient emperors as barriers in their gardens and this Dragon Wall is the only one outside of Asia.

Owner and head chef of Best Friend Restaurant, Vincent Wan, has been passionate about cooking for his entire life. Originally from Hong Kong, he began cooking for his loved ones from a young age and wanted to continue sharing it with more people. His passion for food stems from a passion for art as well. Vincent gives his food life by creating beautiful displays with delicate plating techniques, making it a feast for your eyes as well. Food presentation is common in many different cuisines, but Vincent is one of the few to bring it into Chinese cooking. His restaurant is a chance for guests to experience the joys of traditional Chinese cooking and the elegant craft of plating. On top of his plating expertise, Vincent has won several awards in cooking challenges and contests representing Canada. In 2011, he participated in the Global Chinese Cuisine Contest in New York. The contestants of this competition came from numerous regions including China, Hong Kong, Taiwan, Japan, Europe, Australia and North America. Of the hundreds of contestants, Vincent brought home second place in the Cantonese category.

To showcase his best dishes, Vincent has prepared a five-course meal for participants of the Dumpling Connection’s event on August 16th and September 14th, 2019. These dishes were carefully chosen to highlight the health values of certain ingredients in each season within traditional Chinese cooking.

Rather than start with nachos to share, Chinese people normally begin their meals with a bowl of soup to cleanse the body. It helps your body prepare, like a warm-up, for the feast you are about to enjoy. Depending on the time of year, different soups can act as medicines for your body. The benefits can range from detoxification, nourishment to major body organs, reduction of blood sugar and blood pressure, replenishment of the Qi, and release of any excess element(s) that throw the body off its internal yin-yang balance. The Chicken with Papaya and Conch soup is the best soup to drink during the summer season. Papayas are full of vitamin C and give the drinker the energy to survive the summer heat. It also adds texture to the soup and provides a sweetness to it. In Chinese culture, there are foods that can increase and decrease your internal body temperature. Chicken broths are used to help clear the body of toxins, cool it down from the inside and create balance within your body. Another feature of most Chinese soups that is often overlooked is the long cook time it requires. In Cantonese soups, such as this chicken and papaya soup, the ingredients are simmered for 2 to 3 hours to release all the nutrients from its ingredients which allows the human body to more easily absorb the nutrients. The use of only natural ingredients and lack of oil, cream and butter in Chinese soups maximize the health benefits and strengthens your immune system.

Lobster is known as the ‘King of the Sea’ in Chinese culture, with the Chinese word for lobster being ‘dragon shrimp’. Summertime is the lobster season, with the best catches being in late June. It is one of the best main courses in the world. They go great as shredded meat in sandwiches, different kinds of pasta or risottos. Unlike Western cuisines though, in Chinese cooking, there are many different ways to enjoy lobster. You can steam it, deep-fry it, stir-fry with garlic, put it in a sauce, use black bean with it, or use salt and pepper and more. For the Dumpling Connection event, Vincent has chosen to steam the lobster with garlic and vermicelli to preserve the freshness and butteriness of the meat. Steaming the lobster also gives it a lighter taste compared to the other methods of preparation. The theme of eating lighter foods in the summer is prevalent in Chinese culture. This does not necessarily mean lighter in taste, but rather helping the body feel lighter. Like wearing lighter clothing, eating lighter foods will help the body feel cooler and more refreshed.

Served with a house sauce and cucumbers, Peking duck has a long history in Chinese cooking. It originated from Northern China near Bejing 600 years ago and it is said that cooks from all over China travelled to the capital of Beijing to cook for the Emperor. It was a prestigious occupation as only the best chefs could enter the palace kitchens. Peking duck was created in these kitchens and joined the foods that are considered ‘food of the Emperor’. It eventually moved its way down to the nobles and then the masses after chefs smuggled the recipe out of the palace. Although it is not a dish only eaten in the summer, It has become a national symbol of Chinese cuisine and an iconic dish that everyone must try.

The last main dish that will be served in the event’s 5-course meal will be Marbled Wagyu Beef with a Spring Salad. Wagyu beef is the highest grade of beef due to its higher levels of intramuscular fat and marbling. The meat texture is finer, resulting in a more flavoursome eating experience and its renowned status as the best. The fats in wagyu beef also have less impact on cholesterol than other grades of beef. For the salad, its a no-brainer. Salads are a summer food all around the world, including Chinese cuisine. It follows the lightness theme mentioned above and eating veggies is important in every kind of diet.

Every culture enjoys a variety of sweets and treats. Soupy desserts are one of the more notable desserts in Chinese culture. There are dishes like red bean soup, tong yoon, coconut sago puddings and many more. There are also desserts that seem more traditional in Western culture like tarts, jellies and shaved ice. Each dessert is guaranteed to satisfy your sweet tooth, especially the dessert on this menu. The chef has carefully selected different confections to create a special house platter. It features mango mochi ice cream, red bean and sesame ice cream, crispy wontons and a fresh red bean pancake. With so much variety, it will like a cultural tour of tastes in your mouth.