The Surprising Benefits of Star Anise

Star anise is one of the most fascinating foods with its star-shape, potent licorice-like taste, and medicinal properties. There are many benefits of star anise to discover and we will explore some of the most important ones here.

Native to Southwest China, star anise is an important spice in Chinese cooking and is also a valued ingredient in traditional Chinese medicine. It stands out for its antibacterial, antioxidant and anti-fungal properties, but has also been used to help alleviate digestive ailments, hormonal imbalances, and sleep problems. Many of the benefits have also been confirmed by modern medical studies.

A seed pod from the fruit of the Illicium verum plant, star anise belongs to the magnolia family. Some people confuse it with anise seed because of the similar names and flavours, yet the latter actually belongs to the parsley family. However, they both contain the flavonoid anethole, which gives them a licorice-like taste. Note that there is also a Japanese version of star anise, which is toxic and should not be consumed.

On its own, star anise packs enough punch to flavour dishes, but it is also one of the ingredients of the Chinese five-spice powder (a blend of star anise, cloves, fennel seeds, cinnamon and Sichuan pepper). The Indian spice blend garam masala also makes use of star anise, as does the famous Vietnamese “pho” soup. In the West, the spice has complemented baked items, jams, and syrups, and also certain alcoholic drinks, such as absinthe and ouzo.

Star anise can be added to dishes either as whole seed pods or in powdered form. It is good for stews, sauces, marinades, soups or braised dishes. When using the pods, it’s a good idea to add them toward the end of cooking because they are strong in flavour. Also, since they are not edible, you should remove them when the dish is ready to serve. The ground spice is used like other powdered spices, but it’s still strong, so start with a small amount and experiment with the flavour to suit your taste.

Traditional Chinese medicine (TCM) takes a more holistic approach to medicine compared to modern medical practices. In TCM, star anise is seen as a warming, pungent herb that benefits the spleen, stomach, kidney and liver. Generally, foods that are warming are particularly helpful in cold temperatures and for people who have too much “cold energy” in their bodies. Due to its pungent nature, star anise stimulates the circulation of blood and qi (life energy). Other examples of pungent and warming foods include ginger, garlic, coriander, and fennel.

Learn more about the warm and cold properties of food through our article Food and Your Body Type.

You can also discover the Five Food Flavours of Chinese Cuisine and how they affect your health. 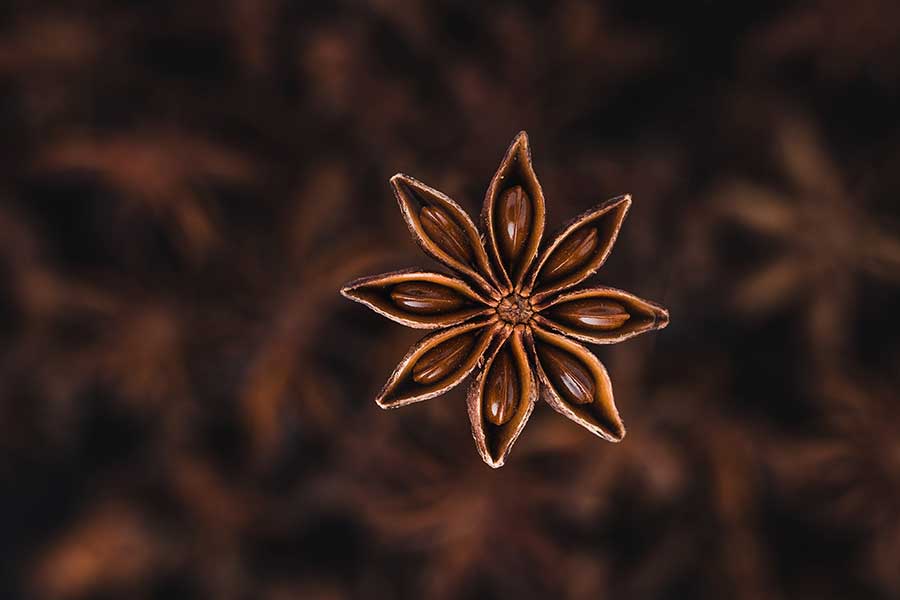 Among the strongest health benefits of star anise, which have since been discovered by modern medicine is its ability to fight infections. It is one of the few foods that contain shikimic acid, which is an active ingredient of influenza medication, such as Tamiflu. Star anise also has antifungal properties and may have some healing efficacy for treating common yeast infections, such as candida. Moreover, star anise has antibacterial properties, and may even combat drug-resistant bacteria.

Star anise has also been known to help alleviate other ailments, such as sleep disorders, rheumatism and joint pain, as well as nausea, constipation and other digestive issues. It may even keep your breath fresh!

Here is a common recipe for star anise tea, which is good to fight potential colds, flu or digestive issues:

For some star anise recipes that you can make at home, here are some great options: