Happy Chinese New Year! What better way to celebrate the New Year than with food? In Chinese culture, foods can have a symbolic and superstitious meaning. During the New Year, it’s especially important to rake in as much fortune as possible.

Let’s make it a little easier for you with this list of the top 7 lucky Chinese New Year foods and where to get them in the Greater Toronto Area. 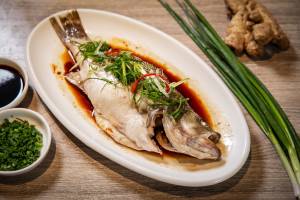 Steamed fish is a popular dish eaten during the New Year. Carps and catfish are the most popular types of fish for this dish. So what makes this dish so popular? In Chinese, the word for “fish” (鱼 yú) sounds like the word for ‘surplus’. Homonyms in the Chinese language are very common and are often the root of superstitions. Serving steamed fish at the end of the evening meal symbolizes a wish for abundance for the coming year. Rather than preparing it with other methods, steaming it is more symbolic. It keeps the fish whole, with the head and tail. This represents a good beginning and ending for the coming year.

The best place to get steamed fish is at the Yunnan Steam Fish Pot Restaurant which specializes in the dish and other types of seafood! The restaurant is located at 3280 Midland Ave #21, Scarborough, ON M1V 0C7. You can also make it right at home with this recipe. 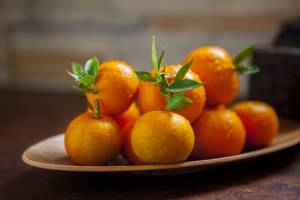 One of the luckiest of Chinese New Year food are fruits like oranges, tangerines and pomelos. The best part about them isn’t how juicy and tasty they are, but how easy they are to find and prepare! They are considered lucky due to their particularly round and “golden” colour, which symbolizes fullness and wealth. These fruits are not exclusive to Chinese New Year and are often presented as gifts on many different occasions. They are also placed in front of shrines as offerings to ancestors and spirits. Not only does the shape and colour of the fruits bring good luck, but like steamed fish, the spelling and pronunciation of these fruits symbolize good fortune. The Chinese word for orange (and tangerine) is 橙 (chéng), which sounds the same as the Chinese for ‘success’ (成). One of the ways of writing tangerine (桔 jú) contains the Chinese character for luck (吉 jí).

Give this tradition a little twist with a Tangerine Posset dessert or just enjoy it normally! Good fortune fruits can be found at most grocery stores.

Enjoyed all year round, dumplings bring a different thing to the table around Chinese New Year with their long history in Asia. As a symbol of wealth, dumplings were thought to resemble Chinese silver ingots (which are not bars, but boat-shaped, oval, and turned up at the two ends). There is an old legend that says the more dumplings you eat during New Year celebrations, the more money you will make that year.

If you plan on eating homemade dumplings this year, there are a few things to keep in mind. Making the filling with either cabbage or radishes implies that your skin will become fair and your mood for the year will be gentle. It is also important to create pleats in the dumpling skin when wrapping the filling when making lucky dumplings. Just folding the dumpling skin in half represents poverty because the edges are flat. There is also a fun game you can play with family and friends while enjoying dumplings. Put a copper coin in one dumpling and a white thread in another. Whoever gets the dumpling with the coin will become the most wealthy that year and the one with the thread will possess longevity.

Famous for their soup dumplings, Ding Tai Fung Shanghai Dim Sum is the place to get your dumplings. They have locations in both Markham and Scarborough. Or you can try Mother’s Dumplings located in Chinatown for more variety!

Also, known as ‘glutinous rice cake’, nian gao are a lucky New Year’s Eve treat because it sounds like the saying for “getting higher year-on-year by year” in Chinese. Generally, it means a promise of a better year. This can imply that children will grow taller, increase success, getting better grades, promotions at work and many other good fortunes. The main ingredients of nian gao are sticky rice, sugar, chestnuts, Chinese dates, and lotus leaves. Read more about its history in the article “Niangao — Chinese New Year Cake”. 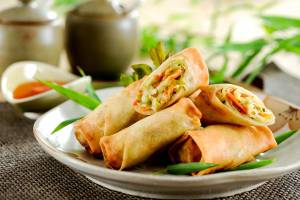 The next lucky Chinese New Year food on the list is everyone’s favourite, spring rolls. Similar to dumplings, springs are lucky because they symbolize wealth. Their signature golden colour resembles bars of gold. So why are they called ‘spring rolls’ when you can eat them all year round? In antiquity, they were consumed during Chinese New Year, which is also known as the Spring Festival, hence the name spring roll! They are the perfect appetizer for your Chinese New Year feast.

Almost every Chinese restaurant includes spring rolls on their menu. One of the best places to get them though is from Chop Chop, although they taste best fresh. Definitely worth the effort, try this Crispy Chicken Spring Rolls recipe. 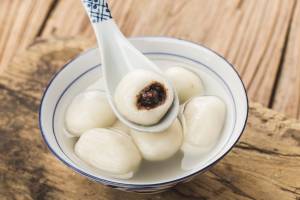 The holidays wouldn’t be complete without dessert. Tangyuan is made from rice flour and filled with sweet fillings such as peanuts or black sesame. They can come in other flavours as well and are popular as a fried treat too. Like enjoying ice cream with your family, this dessert brings people together and brings a more wholesome meaning to the New Year. The roundness of the tangyuan represents reunion and being with family and friends. It can also signify a complete circle of harmony and unity or that everything will go smoothly in the new year.

You can get tangyuan from Sugar Marmalade as well as many other authentic Chinese desserts. 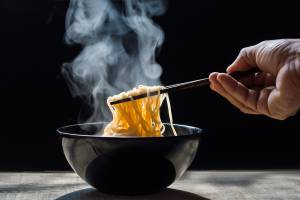 The seventh and last lucky Chinese New Year food is noodles. Extremely versatile and part of every culture, noodles are a staple during the new year. Instead of togetherness or wealth, noodles represent longevity. Whether it be a long life, relationships or a future full of happiness, longevity noodles are the best way to bring about good luck. Traditionally, Chinese noodles are made by pulling a ring of dough, twisting it and then pulling it again. This process is repeated until the ring of dough becomes one extremely long noodle! When cooking the noodles, it is important to refrain from severing them which represents shortening the eater’s lifespan or good fortune. The art of noodle making is a show in itself as well. Watch this video to see how it’s done.

Here are 8 New Year Noodle recipes you can try!

Increase your luck this year with these 7 foods. Have a happy New Year and I hope it is full of good fortune and great food. Share your New Year traditions and resolutions on social media with us!

How Chinese New Year is Celebrated
See All Products