Why do we enjoy Chinese dumplings? There are so many reasons. They are juicy, soft and tasty, and best enjoyed with family and friends. Perhaps you have tasted at least one type of Chinese dumpling. In recent years, this dumpling has become more and more popular in North America, especially through increasing Chinese immigration, flavourful dim sum menus, and of course, the animated film “Kung Fu Panda.”

Indeed, who hasn’t watched Po, the Dragon Warrior, stuff a batch of dumplings into his mouth without getting the urge to try one too? Or seen the lively stuffed bun dumpling, baozi, comes to life in Pixar’s animated short film “Bao” without entering into the imaginative world of food and family!

Of course, there are many kinds of dumplings all around the world, and because of their versatility, they are a beloved staple of different cultures. As we learn more about the Chinese dumpling (there are many varieties in fact), we not only get to experience culinary traditions that are thousands of years old but also understand more about Chinese people and culture.

Here are some of the most popular kinds of Chinese dumplings to discover. These vary based on cooking methods, type of dough and ingredients used. 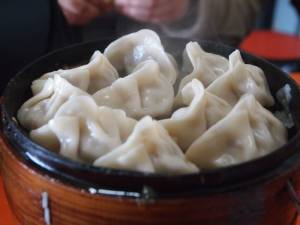 The jiaozi is probably the most popular Chinese dumpling, especially in northern China where it is a celebratory dish for Chinese New Year as well as other major festivals and special events.

Wrapped in dough, the jiaozi is usually prepared with a meat filling such as pork, beef, mutton or shrimp, and mixed with vegetables like chive, celery, fennel, or cabbage and even herbs such cilantro.

Jiaozi are usually steamed or boiled. If they are pan-fried, they are called guotie, and are also popular as a snack, especially in the south of China.

One of the reasons why these dumplings are so beloved in Chinese culture is that they are enjoyed at special events. Families and friends often get together to prepare them. Some people make the dough, others prepare the filling, while others complete the process by wrapping the filling into the rolled dough (usually in a crescent-shape) and then steaming or boiling them. Children (or even adults) often tease each other about the funny shapes of their dumplings. Many people fondly remember the joyful times spent making dumplings with friends or family.

Dumplings are also said to bring good fortune. Sometimes the cook hides a coin inside the dough and the person who finds it might just get some wealth that year. Finding nuts, dates, chestnuts or other sweets also indicate good luck.

The Fine Art of Preparing a Dumpling 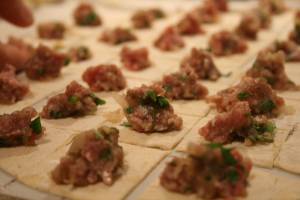 What makes a good jiaozi or guotie? There are several points to keep in mind.

For starters, the dough wrapper should have a bouncy firm texture. That is why it is best to prepare it fresh since the frozen dough can easily get soggy. Sealing the dumpling tightly and allowing for an optimal cooking time also contribute to a delicious dough wrapper. If the dumpling is not sealed properly, it can come undone in the pot. An overcooked dough can also get soft.

At the same time, a good dumpling should be juicy on the inside. Quality, fresh ingredients are essential and one must also pay attention to the texture of the filling. Usually, a dumpling with meat filling includes vegetables to provide a balance. It is also important to have a proper ratio of dough to filling. When eating a dumpling you might not want to a doughy taste in your mouth (which is often the case with store-bought dumplings).

There are also a variety of sauces to accompany the jiaozi and the guotie. Vinegar and soy sauce combinations are classics, however, there are even more creative varieties to discover with chilli oil, garlic, and sesame oil.

One tip for fully enjoying dumplings is to grab them with chopsticks and eat them in one mouthful so as not to pierce the skin and release the juices.

Another popular Chinese dumpling is called baozi, which is a bread-like bun made with various savoury or sweet fillings. It is popular as a breakfast food or on-the-go food because of its versatility. You might recognize it as Po’s favourite dumpling in “Kung Fu Panda” or as the hero of Pixar’s “Bao.”

The most popular type of baozi has pork bun filling to which vegetables can be added. There are a variety of options, such as spring onion, cabbage, green beans, mushrooms and leeks, as well as sauces such as soy sauce and oyster sauce. Other types of fillings include beef, chicken and shrimp. There are also vegetarian options, of course, and even sweet ones, such as red bean.

The baozi is usually steamed (in a bamboo basket) and the best kind turns out soft and fluffy. Like with the jiaozi, the meat filling should be juicy and flavourful.

There are many other dumpling varieties in Chinese cuisine. These include the wonton (served as deep-fried or in wonton soup), the xiaolongbao, a type of broth-filled baozi, as well as dim sum favourites such as the har gow (shrimp dumpling) and the siu mai (pork dumpling).

For Chinese people, as for other cultures, dumplings are a celebration of traditions, family, and friends. They are meant for enjoyment, said to bring good fortune, and when prepared well, they can be part of a nutritious diet.

So what is your experience with Chinese dumplings? What kinds have you tried and what they taught you about Chinese culture? Discover your own dumpling connection.