Getting Ready for the New Year – Chinese Traditions

In 2020, the Chinese Lunar New Year will take place on January 25th. For the Chinese and many other nationalities that celebrate Lunar New Year, this is the most important annual celebration. Feasts and gatherings can occur for weeks around the day of the new year, so preparations are made much in advance to ensure the fresh start is on the right foot. Everyone would like New Year’s Day to be the best in order to lay the foundation for the rest of the year! So, on this day, people put in their utmost effort to welcome health, luck, and good fortune into their homes. 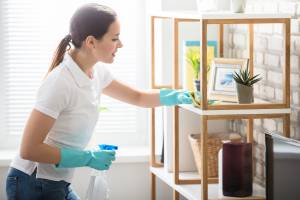 To prepare for the most important 15 days of the year and focus on increasing the odds of good luck, families clean and decorate their houses, dress up, go shopping, settle old debts, and avoid unlucky gestures. Read on to get a glimpse of some of the many traditions the Chinese follow to live long and prosper.

First and foremost, the house needs to be cleaned the most thoroughly in the entire year. Even the most obscure corners of the house are rid of broken items, dust bunnies, cobwebs, and withered plants. This is the one time in the year one wouldn’t be able to get away with stuffing everything under the bed or in the closet! Then, decorations for the best feng shui along with Chinese calligraphy on red banners and red lanterns are placed around the house.

The colour red is very auspicious on New Year’s Day, as it symbolizes goodness, joy, luck and vitality.
Similarly, everyone should be clean and well dressed on New Year’s Day. Nails and hair are cut beforehand, and new clothes, preferably red, are purchased. If one can’t wear an outfit with red, an alternative can be achieved by wearing red jewellery, ribbons, hair accessories, or even underwear, since it is preferred that at least one red item is worn.

Many stores would see their best sales the week before Lunar New Year. You’d want to do your shopping well in advance because stores would be closed on the day of! Masses of food would be purchased for gifts and snacks for hosting parties, or for feasts. Examples of lucky New Year’s foods are dumplings (which are shaped like ancient Chinese gold pieces and symbolize wealth and prosperity), fish (which sounds like the Chinese word for “surplus” and symbolizes an increase in prosperity), glutinous rice cake (with an intention for higher-income or position), and long noodles for longevity. 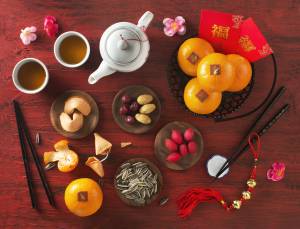 For the celebration, people also purchase new clothes for parties, travelling, and temple visits. They prioritize red, and avoid black and white, which are symbols of death. As general gifts, packages can include candies, candles, trinkets and small cakes. For party hosts, fruits, teas, flowers, sweets and alcohol are often offered but keep in mind not to give pears in the fruit baskets, since the word sounds like “leave” in Chinese. On the other hand, oranges symbolize good luck. Flowers are also popular choices for loved ones or for freshening up homes, but the types need to be considered carefully. Again, white is to be avoided because it is reserved for funerals, especially chrysanthemums. Orchids (for fertility and abundance), peach and plum blossoms are ideal choices. The worst gifts to give would be umbrellas (gifting one sounds like “sending one-off”) and clocks (which would represent “paying one’s last respects”). Sometimes, paper lanterns and tea-light candles are gifted for the lantern festival on the 15th of the Lunar Year, which is the last day of the celebrations.

Before the Lunar New Year, it is best to repay debts and return borrowed items. As for interpersonal connections, people often renew faded friendships and forgive grudges to start anew. To prepare for good luck, families put negativities behind them for the new year and focus on reunions, new beginnings, and new potential.

There seem to be a plethora of traditions to maintain for the New Year, but there are also quite a few unlucky things to avoid! Having accidents, including going to the hospital, breaking objects, and conflicts are to be avoided so their occurrences can hopefully be minimized during the new year. Don’t give gifts with unlucky meanings, colours, words, and numbers, and don’t swear or say words associated with misfortune. Breaking glass and ceramics have connections to breaking fortune. Interestingly, you will also see that nobody showers on New Year’s Day since it would be washing away the good luck! Similarly, cleaning or sweeping implies sweeping out the good luck. Using sharp objects like knives, scissors and needles symbolize cutting the stream of success. Avoid borrowing objects or money, or demanding debt repayment. Don’t see your doctor or take medicine on New Year’s Day, to prevent being sick the whole year. In general, what is done on New Year’s Day is hoped to be maintained for the rest of the year, so we would like to welcome the good things and steer clear of bad fortune.