The Little New Year is also known as the Festival of the Kitchen God. The Kitchen god oversees the moral character of the household. This year, the festival falls on the solar, Gregorian date of January 17th, and the lunar date of December 23rd.

CNY celebrations have more than 4,000 years of history. The days around CNY have reasons for celebrations as well since not everything can fit on one day! More than 20% of the world’s population celebrates CNY to some extent. Due to that, the weeks surrounding Chinese New Year are also established as celebratory. The Little New Year marks the start of the week before Chinese New Year when people really get into the spirit of the holidays.

Ancient writings showed that the Fire God, Zhu Rong, was worshipped before the invention of the stove when fire pits were popular. China’s ethnic minorities still use fire pits, so they continue to offer to the Fire God. 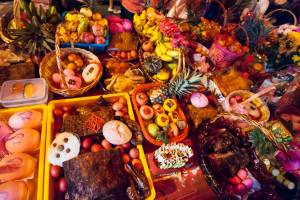 When the tradition was still the norm, the male household head would officiate at sacrificial rites. Pine, holly, cypress and pomegranate twigs were used as firewood to burn a paper image of the Kitchen God to dispatch his spirit to Heaven on the 24th day of Lunar December and report on the family’s conduct over the past year. Then, his spirit was welcomed back to Earth when a new paper image of him was pasted beside the stove on Chinese New Year Eve or Chinese New Year. Food offerings to the Kitchen God included: a roasted pig’s head, fish, sweet bean paste, fruits, boiled dumplings, barley sugar, Guangdong candy (made of glutinous millet and wheat), and other sweets thought to convince the Kitchen God to only say good things about the family in his report.

Along with customs regarding the Kitchen God, preparations such as cleaning, decorating, shopping and cooking occurred at the same time for Chinese New Year. Between the Laba Festival (8th day of Lunar December) and the Little Year (23rd day), thorough cleaning is done to sweep out the old. It is believed that during the last month of the year, ghosts and deities must choose to return to Heaven or stay on Earth. Because of this belief, people and homes must be cleaned well to ensure a timely departure. Haircuts and baths are taken between the Little Year and Chinese New Year.

During noon of Chinese New Year Eve, shops close and don’t reopen until the end of the spring festival. Therefore, all purchases must be made well in advance. Overwhelming amounts of food are purchased to offer to ancestors, entertain guests, and feed family members. This food is cooked before the Eve, and cooking ceases until long into the first month of the new year. Incense, candles, snacks, new calendars, toys, new clothes, and firecrackers are bought from vendors to get into the holiday spirit.

What is the Hungry Ghost Festival?
Sharing is caring

What is the Hungry Ghost Festival?
See All Products