The season of summer is ending which means the end of the heat. From August 23rd to September 7th, marks 处暑 Chùshǔ. “Chu” means to stop, an indication that the summer heat is fading away. This is the 14th solar term of the year. As well as drops in temperature, it marks the end of the rainy season in Northern China while heralding in Autumn, the best season in China. A new season means new habits! 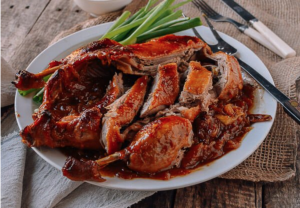 With autumn weather comes strong winds, which will leave the lips dry and chapped. Chinese people believe that it is important to eat foods with moisturizing capabilities in order to rehydrate the body during this time of year.

Duck meat is great for removing autumn dryness since duck has a cool nature. Roast duck, cooked duck with lemon, smoked duck with walnut dressing and sautéed duck with ginger shoots are all popular duck dishes. Chinese medicine believes that duck meat nourishes the yin of the five internal organs while clearing up the heat of the body. 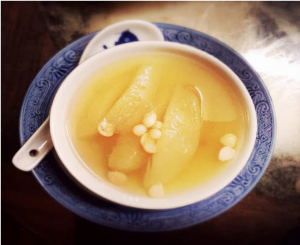 You guessed it, drinking a lot of soup during Chùshǔ is also very hydrating and cooling. During Chùshǔ, people love to drink pear and fritillaria soup. The soup is sweet and soothing. Pears are seasonal and they taste the best during August and September. Fritillaria is a type of flower which is often used in traditional Chinese medicine. This soup nourishes the lungs and eliminates dryness; it can help to prevent coughing caused by dryness in the throat and lungs. One should also avoid eating cold drinks and dishes, such as watermelons, to protect the spleen.

Fresh seasonal vegetables are also highly recommended. Adzuki beans and pumpkins are high in fibre and they help strengthen the spleen. Seasonal sour foods, such as grapefruit, figs, grapes, and plums, are also good choices.

Traditional Chinese medicine teaches people how to live in harmony with the seasons. Walnuts, chestnuts, and many other kinds of nuts are harvested around this time of year. Nuts are full of minerals, acids, and energy. However, overweight people should avoid nuts since they are high in fat and can increase internal body heat.

Many people will feel sleepy during this season. There is a saying in China that translates to “People tend to feel sleepy in spring, doze in summer and feel tired in autumn.” Therefore, one should sleep more and do more exercise. During this time, sufficient rest and high-quality sleep are of utmost importance which gives you the perfect excuse to stay in! 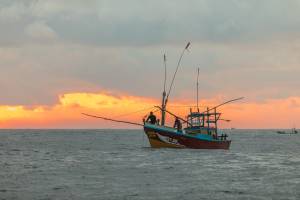 The “End of Heat” also marks the start of the harvest season. Fishermen expect a big haul during this time and farmers are extremely busy during this season as they have to harvest a lot of crops.

The Fishing Season Festival is held in regions along the coastline of the East China Sea. People can enjoy many varieties of seafood during this period. As a custom, floating lanterns are placed over the water which is said to guide spirits during the night and there are also water splashing games.

After Chùshǔ, autumn gradually takes over. The customs before the solar term usually have something to do with ancestral worship and celebrations for autumn’s arrival. We have now reached the end of Chùshǔ and I hope you have learned a lot about this solar term. The next solar term is called 白露 (Bái Lù) or White Dew so stay tuned for our next segment! In the meantime, stay hydrated and get a lot of rest!

Turning of the Leaves
Sharing is caring