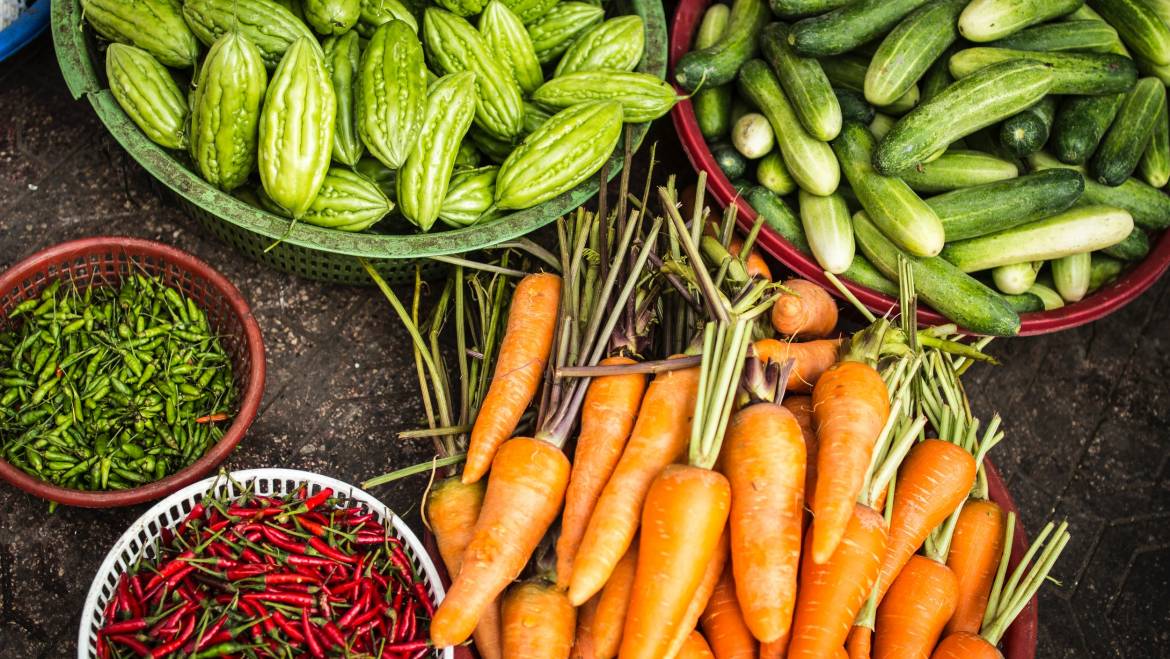 How often do we think the flavours we crave, whether sweet or spicy, are directly linked to our health?

Yet according to traditional Chinese medicine, our cravings are connected to our bodies’ needs more than we may realize.

Traditional Chinese medicine believes that there are five major food flavours–sweet, salty, bitter, sour, and pungent (including spicy)–and each one is connected to the well-being of different organs. This principle is rooted in the ancient Chinese theory of five elements, which believes that the elements of wood, fire, earth, metal, and water permeate all aspects of our world, including food and the human body. Everything is interconnected as follows:

This means that each flavour is beneficial to particular organs.  For example, sweet foods, such as honey and dates are particularly beneficial to the spleen and stomach. That is why, if one craves sweets, this may indicate to a traditional Chinese doctor that the organ is weak or unbalanced.  At the same time, the different flavours need to balance each other out. For example, eating too much sour food may lead to sweet cravings; Salty or bitter food counterbalance too much sweetness

Thus, a healthy diet usually requires a combination of all flavours to allow each organ to get the energies it needs.  This will also result in a more satisfying meal, with fewer cravings. 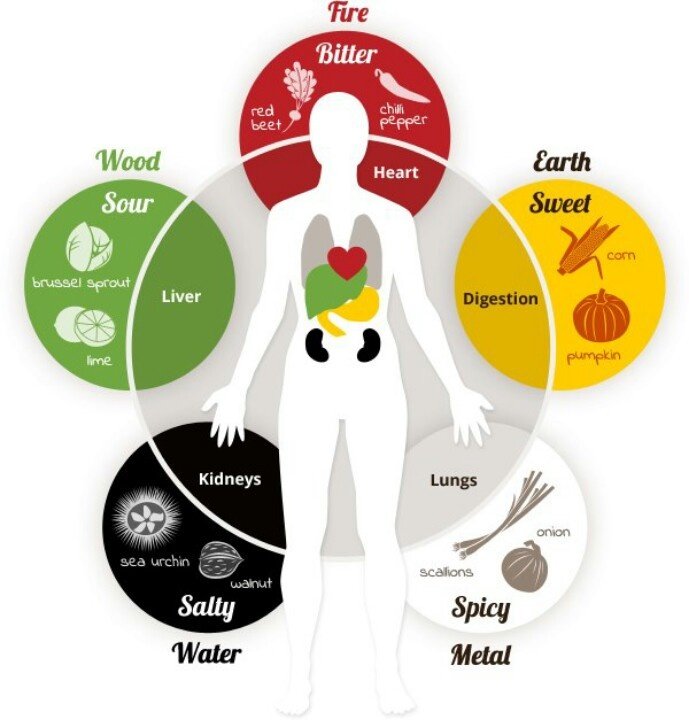 The Body and Flavours

According to the article “The Five Flavours and the Five Organs,” published on the Ping Ming Health website, the different flavours also have the following effects on the body:

Many foods belong to one flavour category, but there are also some that combine different flavours.  For example, lemons are sour, vinegar is both sour and bitter, mangoes and grapes are sour and sweet.

There are also some foods that are predominantly bland, meaning they have no particular flavours, such as cucumbers. The uses of these foods include being a diuretic.

Here are some examples of foods that fall into different flavours:

What are the energies, flavours and other properties of food?

The different flavours have links to particular seasons.  Spring is the season for the sour flavour, early summer for bitter, late summer for sweet, fall for pungent, and winter for salty.  This means that the foods predominating in each season are of that particular flavour. At the same time, one should balance the flavours in one’s diet to ensure harmony. 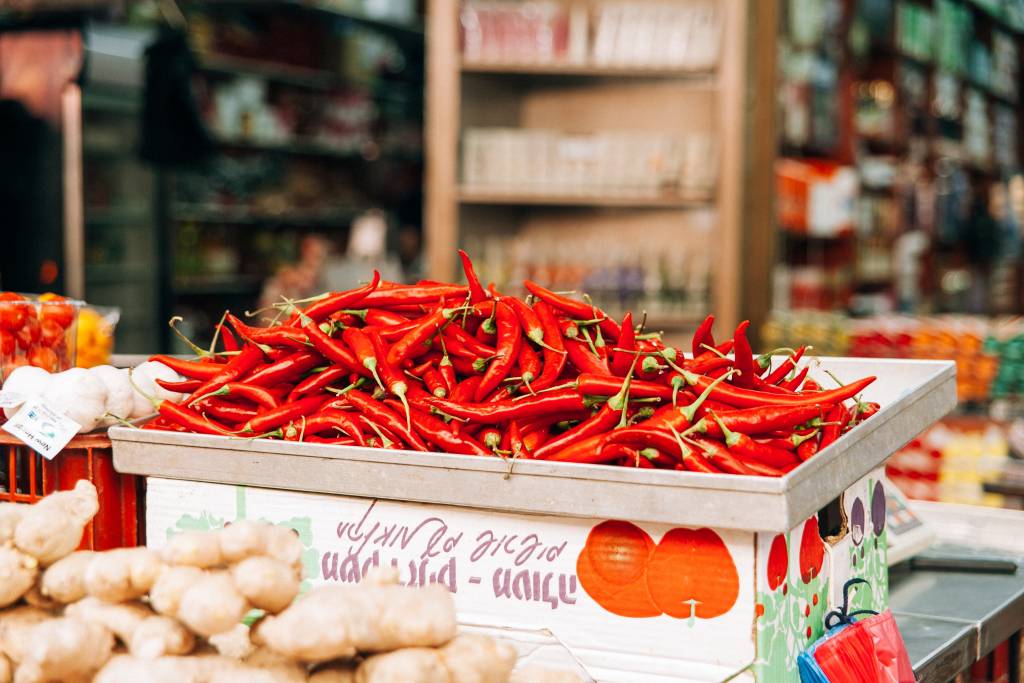 Different regions may also favour different flavours because of certain environmental factors such as climate.  For example, people in humid regions in China such as Sichuan and Hunan, like to eat spicy food because this flavour helps them to perspire, and this removes the dampness and cold that accumulates in the body.

At the same time, in today’s society, processed food, fast food, juices and other popular foods often contain either excess sweetness or saltiness.  Many companies add these to enhance taste and to make people crave the foods more, but too much of one flavour can also cause an imbalance in the body.  To avoid this, one should try to prepare food with wholesome ingredients as much as possible. 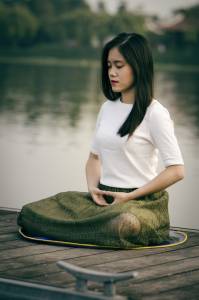 In traditional Chinese medicine, emotions also play a vital role in health and wellness. There is a link between the body and the mind. So if the body suffers, this can lead to emotional problems, such as anger and irritability. On the other hand, if someone suffers from severe conflicts and stress, this will also have a negative impact on the body. Thus, Chinese medicine doctors often touch on the emotional causes of a physical illness.  They are aware that while treatment can improve the physical symptoms if the emotional aspects are not addressed, the illness can easily return.

In traditional Chinese culture, good health is related to morality. A person of higher moral character may be more likely to have better health. While there are many reasons for this, a primary one is that people with good moral standards have higher standards of self-control and can thus manage their emotions better.  For example, if someone can forgive more easily, the person can also let go of unhealthy emotions such as anger and resentment, both of which affect the liver. If one is less concerned with saving face, this will reduce stress and consequently the risk of heart problems. Since the digestive system benefits from a regular pattern, the reduction of digestive problems lays with discipline and steadiness.

Traditional Chinese medicine is an integrated system that looks at the interactions of food, emotions and the body.  Since everything is connected, the person who is well-balanced emotionally is also often also well-balanced physically.  Thus, paying attention to what one eats in Chinese medicine is less about a quick-fix diet and more about an integrative approach to living that pays attention to all aspects of our lives.

5 Tips for Energy Foods for Spring

Does Chinese Medicine Believe in Superfoods?
Sharing is caring

5 Tips for Energy Foods for Spring

Does Chinese Medicine Believe in Superfoods?
See All Products