In traditional Chinese culture, the colour red has ties to an old Chinese myth.

A long time ago, there was a mythical beast called 年兽 (nián shòu) which would come to town around Chinese New Year to feast on human flesh and livestock.

In a desperate attempt to stop the beast, the people learned that nián shòu was sensitive to loud noises and afraid of the colour red.

Hence, it became a New Year’s tradition to light firecrackers, hang red lanterns and red scrolls on windows or doors, and perform the traditional Chinese lion dance, where the lions are emblazoned with the colour red; their dances accompanied by metal gongs with raucous sound. For more about New Year celebrations, read the article “Celebrating Chinese New Year: Little Year“

What Does Red Colour Mean in Chinese Culture?

Red is so popular in China that it is China’s national colour.

You can find it associated with many, many positive meanings, from good luck, joy, and happiness to wealth and fertility. There’s also happiness, beauty, vitality, success, good fortune, and more.

Let’s explore the cultural significance of this magnificent colour and how red is used in popular Chinese traditions, especially during the Chinese New Year (also known as “Chuntsze” Spring Festival or the Lunar New Year.)

If you have ever seen a traditional Chinese wedding, the first thing you will probably notice is that the decorations are all red.

As you learned earlier, the Chinese believe the red colour wards off evil. Thus, in a wedding red is a symbol of celebration, vitality, fertility, and good luck for the couple’s future.

In traditional Chinese culture, brand new red clothing is typically worn during festivals and other celebratory events as a symbol of celebration and vitality.

The tradition says that new clothing is an auspicious symbol of new beginnings signified by removing the old and welcoming the new. For new clothing, red (and variations of pink) are very popular colours.

Red lanterns and red scrolls are hung on windows and doors.

The red colour is thought to ward off the evil mythical beast nián shòu, who used to terrorize villagers in ancient times, until one day the beast met with a child wearing red and ran away. 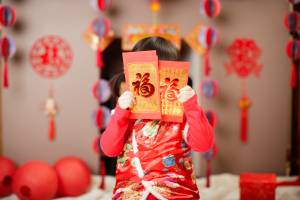 Red pocket money is given to children during Chinese New Year because red is a sign of good luck.

As a tradition, adults will put money inside these red envelopes, called ‘压祟钱 (yā suì qián)’ and gift them to children, friends, and family.

Chinese red eggs are also another popular tradition. You’ll see the hard-boiled eggs coloured red during an important birthday or holiday such as the first month of the first year, or the birth of a child.

Handing out these eggs to family and friends symbolizes joy and renewed life. 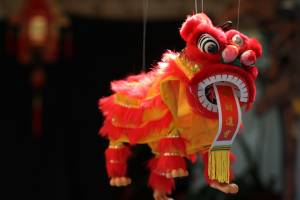 The Red Colour: East Versus West

Different parts of the world associate the colour red with different things, and the difference in cultures means colours can have a completely opposite meaning.

Take the issue of weddings.

However, in China, white is symbolic of the dead, and white is worn at funerals. So you would never wear white at a Chinese wedding!

And the issue of funerals.

If you didn’t know that white is for weddings, not funerals, you might feel out of place wearing white at a Western wedding.

Of course, in western culture, black is the preferred colour for funerals because it represents grief and mourning.

And for Westerners, you should also be careful wearing red at a Chinese funeral, because for Chinese it represents happiness, and funerals are no place to be joyous.

Keep note that these are all old traditions, and the current generation might not strictly adhere to these norms.

In the West, Red Spells Danger

Actually, in the West, you could say the colour red generally has a negative connotation.

Take a traffic light for example.

Why was the colour red given these attributes?

Perhaps the colour is bright and it stands out a lot, so people felt it was good to associate the colour red with danger and warnings.

This really shows the cultural differences between China and the West, since, throughout Chinese history, red has always had positive connotations.

Getting Ready for Chinese New Year
Sharing is caring

Getting Ready for Chinese New Year
See All Products